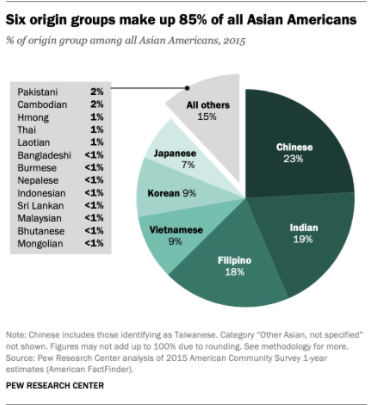 Asian immigrants arrived in American shores in the mid-1800s, playing a significant role in the formation of what the US is today. According to the Pew Research Center, the nation’s 20 million-plus Asian Americans have roots in more than 20 countries in Asia and India with Chinese, Indian, Filipino, Vietnamese, Korean and Japanese making up 85 percent of today’s Asian American Population.

It was recorded that the first major influx of Asian immigrants in America was in the 19th century in which Chinese laborers worked on the transcontinental railroads and gold rush in California.

Looking back in history, Asian immigrants were viewed as a lower class in society since their migration to the US in the 1800’s paved the way for cheap labor.

However, in our society today, Immigrants from Asia not only constitute laborers or skilled workers but they are also shaping the high-tech industry and medical advancements. According to the United States Census Bureau, the share of foreign-born residents in the tech industry has increased by nearly three percentage points since 2009, reaching 38 percent in 2017 (compared to 27 percent in California and 14 percent in the US.

Immigrants make up 69% of the Silicon Valley workforce in highly technical occupations including 26% from India and 14% of China. Looking at these numbers, I don’t think there is a single successful tech company in Silicon Valley with no Asian employees. So why do these companies hire Asians? A simple answer is that Indians and Chinese are dubbed as today’s “Tech Geniuses”.

Given the long history of Asians and their contribution to America, the burning question is “Why are they still subject to racism and discrimination in Modern America?”

We cannot exactly pinpoint one particular reason for this act. There are many factors that play into this kind of behavior of Americans. It could have been brought by the kind of environment they grow up in and even social media. But Anti-Asian hate crimes are on the rise especially during the start of pandemic and mostly blaming Asians as the spreaders of Covid-19. Sad part is that most of these hate crimes involve senior citizens who are weak and helpless. As fear of the virus engulfs the world, the fear of Asians being attacked has swept throughout the country.

However, Anti-Asian hate crimes are not the only problem that America will face. We could also be facing injustice to Asians through false accusations on crimes they did not commit. This is upsetting especially if the person involved is also struggling and has no means to pay bail. The good thing is that if you are in Colorado, there are bail bonds in Colorado who can help.

How can we help?

A bail bond agency could help. A Bail bond is a form of bail payment on the defendant’s behalf by a bail bond agent. A bail bond agent will help you in settling the bail for you to get out of jail until court date. All you need to do is appear on the designated court date and prove your innocence.

The bail bonds agency would usually require only a 10% charge and will do all the work for you.

By contacting Luceros Bail Bonds, you will have experts in all your Bail bonds needs. They have been helping people since 1982 and one of the best bail bonds in Colorado! Don’t hesitate to contact them and book for an appointment.